An English girl shakes the hand of an American solider as U.S. troops march through London on their way to France, Aug. 15, 1917. Just months before, Washington had declared war on Germany. (A. R. COSTER/Topical Press Agency/Getty Images)

To make matters worse, Germany had resumed its campaign of unrestricted submarine warfare at the beginning of February, with a goal to sink 600,000 tons of commercial shipping per month near the British Isles and in the Mediterranean. The strategy was a gamble for Berlin. On the one hand, Germany knew that restarting its U-Boat attacks would inevitably pull the United States, which had kept a neutral stance up to that point, into the war. On the other, the German high command figured it would bring the Allies to their knees and clinch a victory before Washington had a chance to commit to the conflict in any meaningful way. The United States accepted the challenge.

The Spoils of War

From the outset of hostilities in 1914, the United States was divided over whether to go to war. Four distinct camps had emerged in U.S. politics, each with a differing position on the conflict, from full commitment to neutrality at any cost. Numerous smaller groups in the country, meanwhile, lobbied to keep the United States out of the war on social, religious, ethnic and economic grounds. But perhaps more important, the country was in a position to profit off the fight overseas. The great European powers, after all, were preoccupied with the war effort and needed financial and material support to sustain it. President Woodrow Wilson opted to maintain the United States’ neutrality, while the country’s industrial output continued to grow, taking the economy with it; between 1914 and 1917, gross national product grew by 20 percent.

Though Washington was morally opposed to granting financial assistance to countries involved in the war, Wall Street was of a different mindset. American banks contributed hundreds of millions of dollars to the United Kingdom and France. At the same time, the United States’ neutrality enabled it to continue trade with the Central Powers — Germany, Austro-Hungary, the Ottoman Empire and Bulgaria. These ties proved costly, however: The British Royal Navy blockade routinely intercepted American ships en route to enemy territory and impounded them or sent them back home.

The British navy’s prowess created another challenge for the United States as well, albeit indirectly. The Germans, unable to match the Royal Navy’s power on the surface of the ocean, turned their considerable industrial capacity to the manufacture of submarines. The ubiquitous German U-Boat became the blight of Allied shipping, causing havoc among merchant and military vessels alike. The United Kingdom, an island nation with an expansive empire, was particularly vulnerable to these attacks, since it depended on overseas imports. 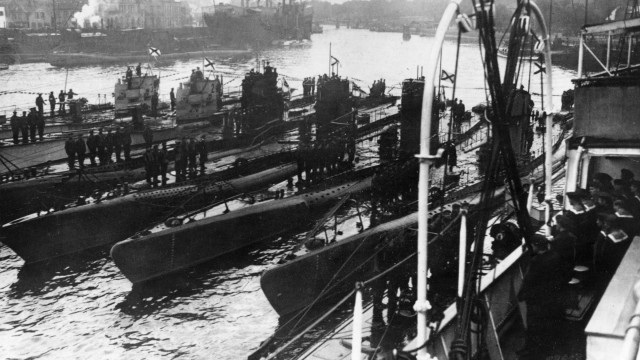 After a U-Boat torpedoed and sank the RMS Lusitania in May 1915, killing more than a thousand passengers — including 128 American citizens — Berlin curbed its use of the craft for fear of drawing the United States into the fight. Two years later, however, Germany had little choice but to reconsider. Allied blockades were taking an increasing toll on the Central Powers, and by early 1917, it was painfully clear to Berlin that it would lose the war if things continued as they were. By lifting restrictions on what U-Boats could target, Kaiser Wilhem II’s military planners figured they could inflict enough damage to turn the tides in Germany’s favor. Although the strategy would almost certainly bring the United States into the conflict, German military advisers estimated that it would take Washington more than a year to gear up for the fight, by which time it would be over. What Germany didn’t know then, of course, was that the Bolshevik Revolution would knock Russia out of the war later in 1917, a consideration that doubtless would have changed the German high command’s mind. And so, Berlin forged ahead with its strategy.

Still, the country was desperate to keep the United States at bay for as long as possible. To that end, German Foreign Secretary Arthur Zimmermann sent an encrypted communique to his country’s ambassador to Mexico. The telegram authorized the diplomat to propose a military alliance between Mexico, Germany and Japan — a bold move, and one with a slim chance of success. The hope was that the partnership would forestall Washington’s engagement in the war abroad by giving it a more pressing concern to deal with closer to home — namely a bellicose Mexican state. It was clear to Germany even then, though, that Mexico was highly unlikely to declare war on the United States. (Considering that Japan was already at war with Germany, getting Tokyo on board was even more of a stretch.) But Berlin had to try something. And by sending an encrypted message, it could at least rest assured that the information wouldn’t fall into the wrong hands, since signals intelligence was still in its infancy at the time.

Or so Germany thought. As fate would have it, the transmission was intercepted and routed through the British Admiralty’s Room 40, home to the best cryptographic specialists of the day. The team there promptly broke the German code, leaving the United Kingdom with a valuable piece of information that it could use to great political effect. The last-ditch attempt to keep Washington on the sidelines turned out to be a self-inflicted blow for Germany. When British intelligence released the telegram’s contents to its U.S. counterparts — having waited a while so as to keep its encryption capabilities under wraps — support for the war effort climbed in the United States. 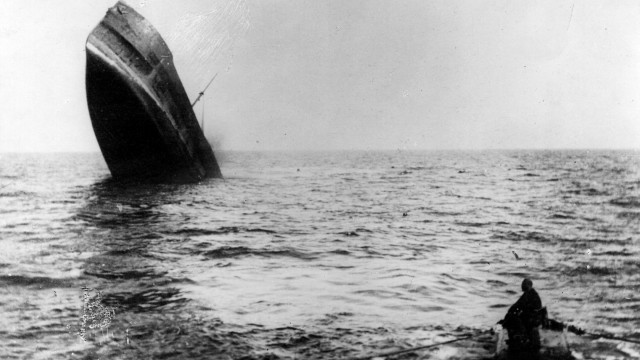 And it soared once the German admiralty formally issued its order to resume unrestricted submarine warfare Jan. 31, 1917. The new spate of U-Boat attacks started claiming U.S. ships among their casualties — five merchant vessels in March alone. Furthermore, the renewed use of submarines was a red line for Washington, which had already issued a harsh rebuke against Berlin in the wake of the Lusitania incident. When the U.S. president asked Congress to declare war on April 2, 1917, he met with little opposition from the government or the public. But he understood that the matter wasn’t quite as simple as taking a stand against German aggression. Wilson was keen to ensure that his country went about things is the right way, asserting itself as a reluctant but dutiful defender of freedom, liberty and democracy.

Beyond the rhetoric, the United States had to make a decision: It could either remain a bystander in world affairs or it could join the fray. To stand by and do nothing would condemn it to a fate not entirely of its own making, subject to the influence of foreign powers. Should Germany win the war, its power and reach would inevitably spread, enabling it to dominate sea-lanes and trade routes. Its tendrils could even stretch to South and Central America, bringing conflicting ideals directly to the United States’ doorstep. An Allied victory, on the other hand, would give British and French interests the upper hand at the expense of burgeoning U.S. businesses. As an emerging economic heavyweight, the United States had no choice but to enter the war to defend its position. On April 6, 1917, the resolution to declare war passed with an overwhelming majority in the House and Senate. 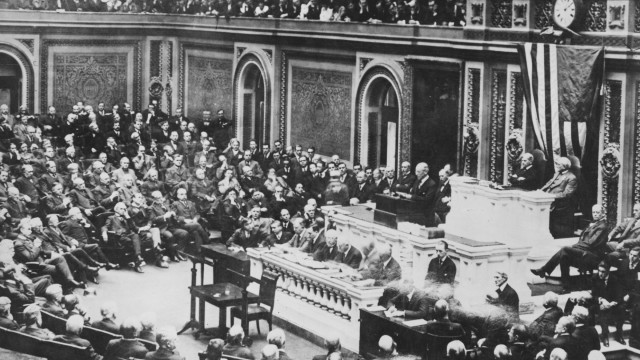 Declaring war and waging it are two different matters, though. The U.S. armed forces scarcely grew during the 1900s, and compared with those of most European nations, they were small, ill-equipped and inexperienced. Between its lack of strategic foresight and failure to invest in military affairs, Washington had its work cut out for it to build a large, competitive army.

The plan was that the American Expeditionary Force (AEF) would deploy to the Western Front under the command of Gen. John J. Pershing. But first, Pershing insisted that troops receive an appropriate level of training. Then came the logistical problem of transporting soldiers and materiel to the front. Lacking transport ships, the United States had to use whatever vessels it could get its hands on to start ferrying personnel to France while investing vast sums to build sufficient infrastructure to facilitate passage of lines at either end. Even with U.S. output geared toward mobilization, by June 1917, less than 15,000 American soldiers had arrived in France; it took just under a year to deploy another 1 million troops. 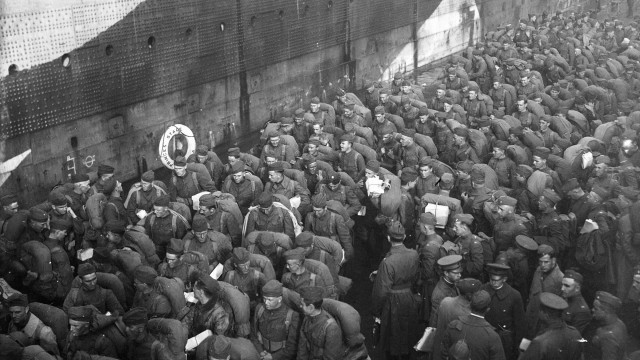 American troops on the dockside in Liverpool Oct. 22, 1918, prior to embarking for France. (A.R. COSTER/Topical Press Agency/Getty Images)

Once they arrived at the front lines, the American Expeditionary Forces’ shortcomings truly came to light. Their European counterparts saw them as callow and untested. And having missed out on the accelerated technological development that wartime demands, U.S. forces had to rely on British and French equipment until the domestic war machine could catch up. Still, despite pressure from the Allied commands, Pershing resisted using U.S. personnel as casualty replacements to plug the gaps in decimated French and British units. Instead, he wanted his army formations to be viable in their own right, no matter how many months it took to achieve that goal.

By comparison, the U.S. Navy was technically credible, thanks to a late 19th-century modernization program that funded the design and manufacture of dreadnought-class warships. The fleet was not enough to overcome the mismanagement of Navy Secretary Josephus Daniels, however. Daniels did little to prepare the Navy for war, leaving the force undermanned and undertrained. Because the Navy’s role was largely confined to mine-laying operations, its limitations weren’t put to the test much during World War I, though five American dreadnoughts were eventually attached to the British Grand Fleet to bolster the Royal Navy.

Notwithstanding its initial stumbles, once the United States mobilized, it was game over for the Central Powers. German U-boats continued to plague shipping for the remainder of the war, but the advent of transatlantic convoys mitigated the problem and bought the United States the time it needed to get a full military deployment to Europe. Eventually, the convoys even began to erode Germany’s precious U-Boat fleet. The United States foiled Berlin’s plan to starve the Allies into submission before Washington could offer a challenge. In the process, its military learned to organize, scale and transport huge amounts of men and materiel across vast distances — a lesson that would pay dividends for the country throughout the 20th century. But most important, the United States had achieved a milestone in international affairs, breaking its isolationism to join in a global war on another continent in pursuit of its geopolitical imperatives.

The legacy that the United States established for itself in World War I is not that of a military power but of an international actor. It was the sheer extra mass of U.S. military assets laid against an exhausted stalemate that made the difference, rather than a shift because of American military capability or prowess. Despite its desire to avoid getting embroiled in European affairs, the country entered the conflict, realizing at last that its position as an emerging economic colossus was guaranteed and supported by global markets and trade. Although the new international system was to remain fragile through a global economic depression and another World War, the United States could no longer afford to extricate itself from world events. The Great War represents the first concrete step in the country’s rise as a superpower.