The Eurozone: On the Edge of Crisis 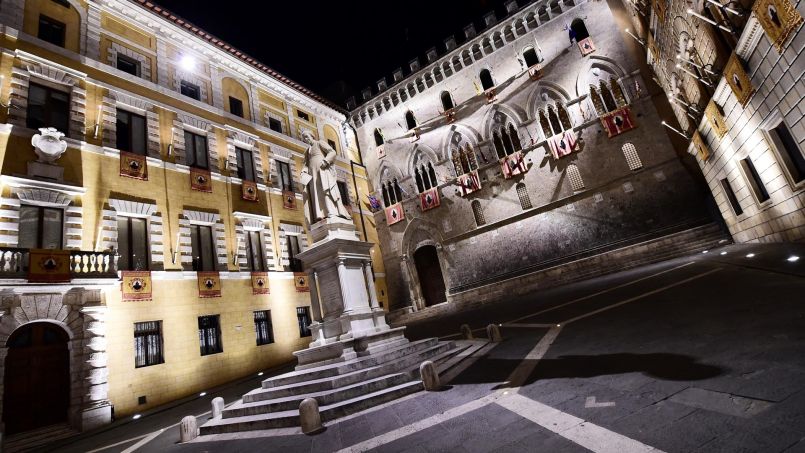 The bailout of Banca Monte Dei Paschi di Siena, Italy’s third-largest bank, was the first to take place after the eurozone instituted its “bail-in” rules. But those rules’ apparent failure adds another layer of risk for the currency union. (GIUSEPPE CACACE/AFP/Getty Images)

As European policymakers look at the turbulence ahead in 2017, they are watching the eurozone’s bond market with growing concern. A sell-off in government bonds, matching the same trend worldwide, is adding stress to the bloc’s already vulnerable economies, especially in Southern Europe. Officials’ fears have only been worsened by the sell-off’s uneven pace, as some members’ bonds have been sold more rapidly than others’. The differences in yield between Italian and German bonds, for example, has reached levels not seen since 2012, when a sovereign debt crisis nearly brought the currency union crashing down.

That debt crisis exposed the “doom loop” created by European banks’ tendencies to hold their home government’s debt. In theory, the vicious cycle could start when markets lose faith in a government’s ability to pay back its debt, precipitating a sell-off of its bonds. The resulting drop in bond prices would then hit the balance sheets of the banks that still hold those bonds, making them more likely to need a bailout from their governments. This, in turn, could further erode investor confidence, leading to additional sell-offs that damage the banks even more. Despite the danger that banks’ practices pose, eurozone regulators have yet to find a way to sever the loop. 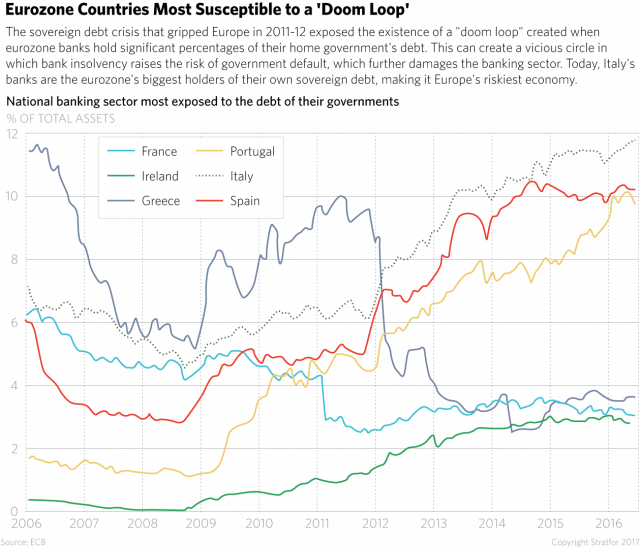 Since mid-2016, rising expectations of a return to inflation have driven investors to sell off their bonds, especially in the wake of the U.S. presidential election. (Higher inflation reduces the attractiveness of bonds to investors, and bond markets have seen sharp sell-offs across the board over the past few months.) Those expectations have already played out in the eurozone, where the annual inflation rate rose from 0.2 percent in July to 1.8 percent in January. This has encouraged the European Central Bank (ECB) to scale back its bond purchase program, which it uses to stimulate inflation, from 80 billion euros ($85 billion) to 60 billion euros per month. With the ECB providing less support for bond prices, yields (which move in the opposite direction of prices) have risen.

On its own, this would have caused problems for the currency union by putting more pressure on indebted countries such as Italy, which would in turn face higher debt payments. But mounting political risk in countries such as France, Italy and Germany has magnified the sell-off’s effects as the gap in bond yields between Europe’s peripheral countries and Germany, whose debt acts as a baseline because of its perceived safety, has widened. This indicates that the market’s fears of a eurozone breakup are growing. If the currency union implodes, investors would much rather be left holding German debt, for example, than bonds issued by Greece or Italy. 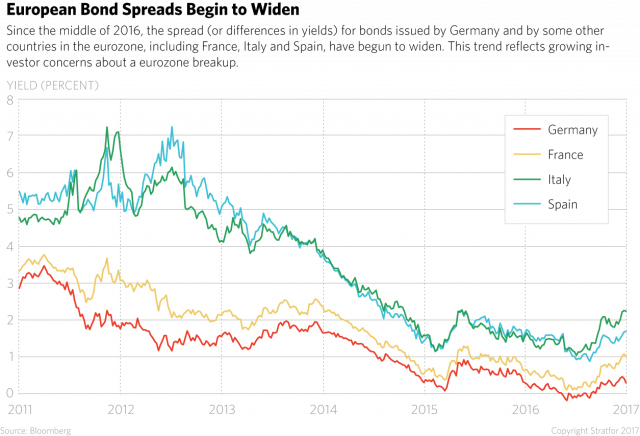 A Weighty Set of Political Worries

National elections are scheduled this year in the Netherlands, France and Germany. But concerns about electoral outcomes are running especially high with regard to France’s two-round presidential election in April and May, where there is still a chance that nationalist candidate Marine Le Pen, who has promised to pull France out of the eurozone as quickly as possible, could win. Though France’s electoral system is designed in part to keep an extremist party like Le Pen’s National Front out of office, all other candidates running for the presidency have weaknesses that could prove fatal to their campaigns. Her defeat, therefore, is not a foregone conclusion.

In Italy, meanwhile, a fragile government and deepening divides among the ruling Democratic Party have increased the likelihood that elections will be called there sometime this year. The result could easily usher in a new government that is heavily influenced by the Five Star Movement or the Northern League, parties that both want Italy to leave the eurozone.

If Euroskeptic forces are able to access power in either country, they wouldn’t necessarily have to win a referendum on leaving the eurozone to damage it. Even the act of scheduling a vote in France or Italy could precipitate a crisis that would shake the currency union to its foundations.

Greece is another cause for worry among eurozone leaders, who do not want Athens’ debt bailout program to linger as an issue in the Continent’s elections. With sizable debt repayments due in July, Greece faces pressure to accept a bailout review, which it must do before it can get the funds it needs to make the payments. To keep Greece’s situation from influencing election results, this would ideally happen at the Feb. 20 meeting of the eurozone’s finance ministers. Greece has enough money to last until July, but if the issue is not resolved by then, it would have to negotiate a brand new bailout program. This would trigger another Greek crisis much like the one that preoccupied the eurozone in 2015 and carry the danger of a Greek exit from the eurozone.

At the same time, economic risks continue to swirl, particularly around Italy. The eurozone’s third-largest economy has its second-largest ratio of debt to gross domestic product (132.4 percent), while its banking sector — saddled with 276 billion euros in bad loans — is teetering on the edge of crisis. Adding to its troubles, Italy is the eurozone member most vulnerable to a doom loop: Italian institutions are the bloc’s biggest holders of their own government’s debt, which accounts for just under 12 percent of its banking sector’s total assets. 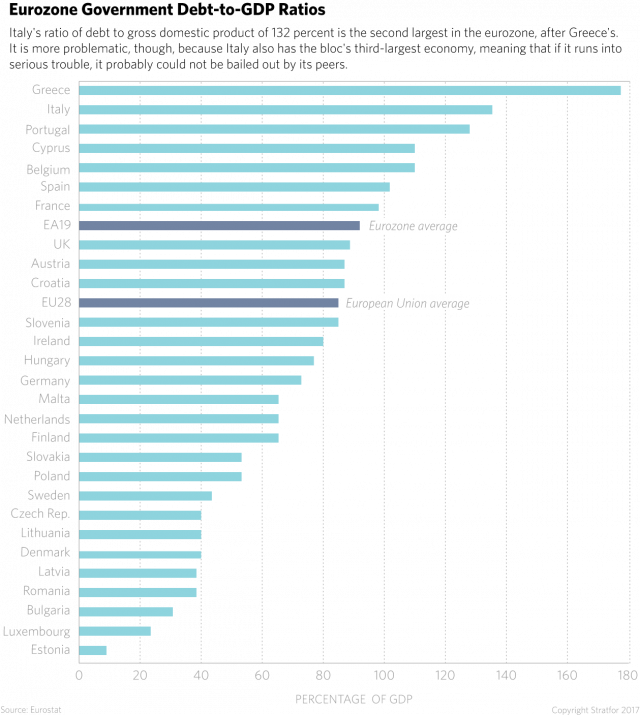 In the years since a doom loop triggered by the Greek crisis nearly led to the eurozone’s collapse, authorities have tried (but failed) to break the bond connection between banks and their governments. A German proposal to limit the amount of their own government’s debt that banks can hold has been hotly contested by Italy and Spain, since implementing it would cause massive disruptions to their economies.

Another German-led measure involved the creation of “bail-in” rules, which were adopted at the start of 2016. They required that a troubled bank’s private debtholders absorb its losses first, essentially losing their investment, before government money could be used to bail it out. The first major test of these rules came in December, when the long-ailing Banca Monte Dei Paschi di Siena — Italy’s third-largest bank — ran into serious trouble and needed a bailout. But many of the bank’s debtholders were unsuspecting private citizens who had been sold the debt as a safe savings vehicle. Forcing them to take a loss with a bail-in would have spurred a major political backlash, strengthening the hand of Euroskeptic parties such as the Five Star Movement.

The Italian government’s solution to shield itself from the political fallout involved two sleights of hand. First, it used a nearly out-of-date stress test from mid-2016 to justify a more favorable type of recapitalization. Then, armed with the excuse that debtholders had been misled about the nature of their investment, it reimbursed them. Rome’s tactics saved the bank, at least for the time being, and prevented a substantial public outcry. The European Commission, no doubt also worried about the ramifications of strengthening Euroskeptic parties, signed off on the plan. Nevertheless, the situation is not entirely resolved: European authorities must still approve a business plan for the bank before the bailout can proceed. The bail-in rules, moreover, seem to have fallen at their first hurdle, while the potential doom loop between banks and their governments remains intact.

The existing fix for the doom loop appears to be failing, but European authorities have not stopped searching for ways to correct it. In January, the European Banking Authority suggested the creation of a Europe-wide “bad bank” that could buy nonperforming loans from EU banks to get them off the banks’ balance sheets, thereby improving the sector’s financial health. The bad bank would then sell those loans to investors. If it took a loss on any of its transactions, it could theoretically seek reimbursement from the originating bank so that the plan’s original backers would not lose money.

Another idea first floated in October 2011 has also been gaining traction lately: the creation of European safe bonds, or ESBies. Under this plan, an entity (private or public) would buy the bonds of all eurozone countries and create two pools: one for riskier economies and another for safer ones. It would then issue bonds representing the risky debt pool (preliminarily named European junior bonds, or EJBies, containing debt from countries such as Greece and Portugal) and others for the safer pool (with debt from countries such as Germany and the Netherlands). This pooling could make it harder for investors to pick one country to desert in a crisis while also creating a larger pool of truly safe assets that investors could rely on. In September, the European Systemic Risk Board, headed by ECB President Mario Draghi, created a task force to explore the idea, and the European Commission is expected to publish a white paper on it in March.

Unfortunately for the plans’ architects, Germany — the eurozone’s most influential voice — has raised objections to both ideas. The German public is strongly opposed to any proposal that might involve subsidizing the indebted south with its tax money. Over the past few years, Germany has taken steps to insulate itself from the eurozone’s potential dissolution. When the ECB launched its bond-buying program in January 2015, for example, Germany finally relented to a policy it had disagreed with on the condition that the bonds continued to be divided among members’ central banks rather than pooled centrally, making the arrangement clearer in the event of a future divorce. More subtly, data from the Bank for International Settlements has shown that German banks have stopped lending to companies based elsewhere in the eurozone in recent years, preferring instead to keep their money inside Germany — another step away from integration and liability mutualization within the bloc. So, any idea that appears to involve risk pooling will probably receive short shrift in Germany, especially during an election year.

Will the Eurozone Survive the Year?

The eurozone has entered a difficult year, and some investors are showing more and more doubt in its ability to survive. If Europe successfully leaps the political hurdles that lie ahead, uncertainty in the market should rapidly fade, returning money to its bond markets. But even if that does happen, economic risks (made worse by political factors on the Continent) will continue to feed fears for the currency union’s future.

European bond yields are rising, buoyed by global expectations of inflation and by the ECB’s gradually tightening monetary policy, which means that debt repayments will also rise. If they continue to do so gradually, bond yields are unlikely to reach uncomfortable levels during 2017. But because the doom loop between banks and their governments is still intact, and because the Italian banking sector is still extremely fragile, Italy will be highly prone to crisis. And upticks in debt repayments, no matter how gradual, will only increase its vulnerability.