Filling the Holes That Brexit Exposed 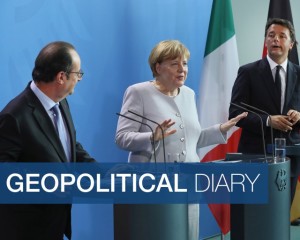 The dramatic events unfolding in Europe and the world due to Britains vote to leave the European Union is complex and impacts every nation and in turn every one.

As part of our view of the world, we thought it was appropriate to repost this article, courtesy of Stratfor.com

EU member states agree that the political and economic status quo in the bloc needs to change, but they cannot agree on how. The Brexit vote has made the need to reform the bloc, fight Euroskepticism across the Continent and prevent countries from exiting the union more urgent than ever. The leader of Poland’s ruling party, Jaroslaw Kaczynski, made headlines recently when he said Poland was working on a new EU treaty that would allow members’ national parliaments to repatriate powers from Brussels. Others are pushing reforms as well. French President Francois Hollande will visit several EU members next week to discuss reforms, and Slovakia will host a summit in September on the bloc’s future after Brexit. Treaty change is out of the question in the current political environment, but at some point, EU members will have to face the difficult question of how to reform the bloc.

Britain’s decision to leave the European Union will shake the balance of power in the bloc. Britain has generally defended liberal, free-market policies, which has often made it an ally for like-minded countries such as the Netherlands, Denmark and Sweden. Though the United Kingdom and Germany frequently disagree on EU policy, Berlin has often used London as a counterweight to the protectionist and interventionist policies defended by southern countries including France and Italy. But the United Kingdom is also a non-eurozone country that is more interested in the EU common market than in the aspiration to build a federal Europe. As a result, many of the countries in Central and Eastern Europe see the United Kingdom as a relevant ally when it comes to defending the interests of countries outside of the eurozone and resisting Brussels’ attempts at centralization. No matter the outcome of Britain’s negotiation with the European Union, London’s influence over EU affairs is likely to diminish in the coming months, and the rest of the member states are already planning for that future reality.

The various ideas for EU reform have reflected the interests of the countries that are offering them. Italian officials have said Rome is working on a proposal for treaty change in 2017 to coincide with the anniversary of the Treaty of Rome, which created the European Economic Community (the European Union’s predecessor) in 1957. The announcement is not a surprise: Italy has been vocal about its intention to use the British referendum as a pretext to introduce more flexibility in EU rules. (The current push to circumvent EU rules on state aid for banks is the latest example.) From Rome’s point of view, more flexibility means more room to spend, more EU investment in Southern Europe and more risk sharing among member states.

Italy is not alone in its rationale. Reports from recent meetings of EU finance ministers suggest that France, Italy and Greece support Spain and Portugal on their quest to avoid sanctions for failing to meet EU deficit targets, while Germany, the Netherlands, Austria and Finland want Brussels to punish Spain and Portugal. There will probably be a compromise, but this will do little to reduce north-south mistrust in Europe.

These positions are not casual. Southern Europe would like the European Union to become a transfer union where wealth from the north is transferred to the south, rules are flexible and financial risk is shared. Northern Europe, on the other hand, is terrified by the thought of sharing risk and resources with governments that fail to introduce economic reforms. That both sides are trapped within the same currency union makes compromises necessary but also costly and often inefficient.

This explains why, after the British referendum, Germany proposed to focus reform proposals on noncontroversial issues such as border controls and security. Eurozone integration is out of the question, especially as the German government is under pressure from a Euroskeptic opposition. Members of the German government heavily criticized a recent proposal by the European Parliament president to create a federal EU government under supervision of the Continental legislature, saying Brexit showed that people want less bureaucracy, not more. A subtler explanation is that countries in Northern Europe do not want additional integration with the south unless they get full control of their neighbors’ ability to spend and borrow, an imposition that Southern Europe can hardly accept.

But as the French, the Germans and the Italians discuss their views for EU integration, other governments want a say, too. The fact that Poland — a country that joined the union only 12 years ago — is becoming more vocal in its criticism of the founding members of the bloc and in its defense of the European Union as an intergovernmental structure where national parliaments have greater authority speaks volumes of the current state of the union. Kaczynski recently said that the European Union should not become a “Carolingian union,” meaning that Germany and France should not be the only ones calling the shots.

Poland alone has little power to shape political developments in the European Union, especially at a time when its government has turbulent relations with EU institutions. But Warsaw is not alone in its view of the European Union as an agreement among sovereign nation-states. When the European project was born six decades ago, the nation-state was seen as the problem and supranationality as the solution. Now that the terms of the debate are changing again, Poland’s view of the bloc may prove more popular than the bureaucrats in Brussels expect.

At this point, changes to the treaties governing EU membership seem unlikely. Europe is so politically fragmented that nobody is ready to start a process that could worsen the bloc’s problems. Approving a new treaty would require unanimity, which is almost impossible. Reforming existing treaties would raise key questions: what to change and why? A reform to deepen the process of eurozone integration could lead to more Euroskepticism in the currency area and alienate the non-eurozone members. The return of powers to national parliaments could appease Euroskeptics but lead to disintegration of the bloc. A new treaty would also trigger a landslide of referendums across the bloc, with uncertain consequences. Additionally, France and Germany will hold general elections in 2017 and would not even consider treaty change until the electoral process is over. But sooner or later, treaty change will be back on the table, for the simple reason that most member states feel uncomfortable with the status quo. This debate is necessary for the European Union’s survival, but the process could fragment the bloc beyond repair.