The Global Order After the Brexit

The dramatic events unfolding in Europe and the world due to Britains vote to leave the European Union is complex and impacts every nation and in turn every one.

As part of our view of the world, we thought it was appropriate to repost this article, courtesy of Stratfor.com 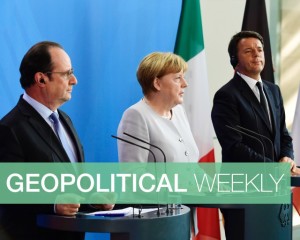 Buyer’s remorse was the refrain in the wake of the June 23 Brexit vote. A narrow 52 percent of British citizens voted to leave the European Union. That is to say 48 percent of the 33 million British citizens who felt compelled to vote believed they were better off staying in the European Union. Such a close vote on such a fateful decision with such global impact naturally yielded disbelief on the island and beyond.

Champions of the status quo quickly seized on maps and scatter graphs of the voter breakdown to argue their position: “Of course,” several remarked, “it was the uneducated working class that dragged us into this mess.” Or, “It was those old baby boomers with their fat pensions who are gambling on the future of the young.” Perhaps most interesting is the spreading belief among “remain” voters that enough Brits will come to rue their decision and that, one way or another, British Prime Minister David Cameron’s eventual successor will find a way to avoid heeding the call of the nonbinding vote. Then, calm would be restored to financial markets and maybe, just maybe, everything could go back to normal.

Many of us (especially those on the outside looking in) see the vote as something of a democratic marvel. With a high voter turnout of 72 percent, the plebiscite empowered the people to decide the fate of the island, and the resulting rancorous debate is a riveting accompaniment to an honest vote. Still, many are flatly uninterested in the democratic virtues of the vote. They argue that people who voted with their emotions, hoping to shun immigrants or to reclaim British sovereignty, will surely rethink their choice once they realize its painful economic ramifications. Given the current state of chaos in British politics, there may well be a political turn of events over these next few months that triggers early elections and widens the divide between the “leave” and “remain” camps before the government begins signing the divorce papers.

But beware of wishful thinking, especially if you find yourself or others framing undesirable outcomes as a product of irrational thought. An instinct to deplore the result rather than to understand it will create only more room for error in judging the ultimate outcome. After all, sophisticated financial analysts, fearing a Brexit, made the erroneous assumption that “remain” would prevail, even when poll numbers fell well within the margin of error. The world is still reeling from that market correction.

On the other side of the Atlantic, Americans are looking at the Brexit and reflecting on what effect an uneducated, working-class voting bloc could have on the future of the United States in the upcoming presidential election. But it would be wrong to assume that only Britain’s poor and uneducated believe the United Kingdom should leave the European Union; demographic breakdowns of the British referendum vote just as easily point to a large age divide among voters. Unlike the 73 percent of 18- to 24-year-olds who voted to remain, the 60 percent of voters aged 65 and older who chose “leave” remember the world before the United Kingdom joined the European Economic Community in 1973. As they argue, the United Kingdom has existed for centuries while the European Union has existed for only two and a half decades. As a result, they do not see exiting the union now as a particularly existential decision. Many are naturally distrustful of continental Europe — particularly now that it is showing serious signs of disintegration — and genuinely believe that their country will come out stronger if it moves early enough and effectively negotiates the terms of a split. These are voters driven by geopolitical considerations and a sense of place and history.

Moreover, the United Kingdom, a country that epitomizes civility, is among the 10 most educated and connected countries in the world. Some have characterized the vote as a struggle between the sophisticated and international capital city and the rest of the country. This may be true in part, but what of the 40 percent of London voters who opted to leave? Even if “remain” voters hold university degrees in higher numbers than “leave” supporters do, a large proportion of undecided voters deliberated their decision until the last minute before casting their ballot. One particularly distressed voter interviewed by BBC World Service left quite an impression on me the night of the vote. Her anxiety was endearing and palpable as she described standing outside in the rain for hours, letting other voters move ahead of her in line. She had done her research, listened to the experts on both sides, and debated with family and friends, and she was downright tortured by the fact that her government had put her in the position to decide such an important matter. She, and several others interviewed, did not fall under the stereotype of xenophobic and uneducated laborers voting with emotion over reason.

Emotion is a word invoked in many Brexit debates. If we say someone votes with emotion, the assessment is often understood as a pejorative, implying that the voter is irrational. But when it comes to matters of justice and national sovereignty, emotion can assume a particular depth. When people feel that they have fallen behind economically and that it will take too long to catch up in a globalized world; that leaving domestic decisions to foreign leaders with completely different priorities, customs and interests is unfair; that national culture is being eroded by outsiders; that the will of the ordinary should prevail over that of a privileged elite — these are all valid, deep-seated “emotions” that easily transcend demographic divides. Emotion, in other words, becomes synonymous with nationalism, and some level of nationalism resides in every one of us.

A sense of embattlement enlivens the innate sense of nationalism. As more and more election cycles and referendums worldwide reveal, a substantial number of people apparently do not believe that the elites have their nations’ best interests at heart. Globalization supposes that there will be winners and losers in every country. But it also promises that even the losers, with enough time and a bit of assistance, will eventually come out ahead.

Many people have grown tired of waiting for the benefits of a vastly interconnected world to trickle down. As the world whizzes by them, their wages remain flat and jobs become scarcer. Then it becomes convenient to blame their straits on the immigrant speaking a strange tongue and taking their employment opportunities. These people are not studying demographic charts and complex economic models to understand why their country needs immigrants in the long run, nor are they lying awake at night fretting over a Moody’s downgrade. The more sophisticated rhetoric they hear about the benefits to come — and the fewer benefits they actually see — the more distrustful they become. As John Maynard Keynes said, “In the long run we are all dead.”

The masses begin to crave plain speak on a simple path to a better life. The populist leaders who answer their call know perfectly well that a simple path does not exist. They will find neither the political establishment’s support nor the financial resources to make good on their promises. Expectations breed further disappointment, and more political volatility ensues.

This picture contrasts with the ever-increasing openness and integration promoted by many pundits who equate more connectivity with greater stability. Instead, we may be entering a post-globalization world. The integration of Central and Eastern Europe and China into the world economy over the past quarter-century set off record trade expansion, culminating in super-stretched supply chains, massive shipping fleets and cross-hemispheric trade proposals such as the Trans-Pacific Partnership and the Transatlantic Trade and Investment Partnership. But global trade growth has been in structural decline since the Great Recession. Faced with slower growth, countries in the developing and the developed world will still be driven to seek out additional markets, but the path will be slower and rockier thanks to a tempestuous blend of political conflict within states, geopolitical divergences between states and, in the longer run, technological shifts that will transform the way we consume, build and trade internationally. 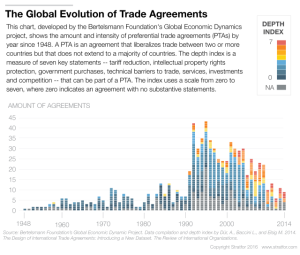 The political dimension is already evident in the rise of anti-establishment voices worldwide and in the geopolitical divergences long in the making. Brexit was a catalyst for European fragmentation, not the trigger. The Continent was already splitting, and the United Kingdom, an island that has always kept a fair distance from Continental machinations, was among the first to split off. In the coming years, blocs of countries with like-minded interests will band together to fundamentally reshape the European map.

To Europe’s east, Russia, locked in a confrontation with the West that stems from its own geopolitical vulnerabilities, is already in the process of isolating itself economically from the West as best as it can while supplementing with linkages to its East. China, meanwhile, is cautiously integrating with the West financially. Although it still relies on overseas trade, Beijing is working on a long-term plan to move up the value chain and become more self-sufficient at feeding its large consumer base while also creating alternatives to Western-dominated lending, legal and regulatory institutions.

The gradual shift in China’s economic profile is part of a broader technological shift that will transform the world. Like South Korea and Japan, China has followed a traditional path up the production ladder, taking advantage of a world that operates on long supply chains and cheap labor to produce components and assemble parts for low-value goods with an eye toward higher-value production. But advances in automation, advanced robotics and software-driven technologies are shaping a future that will rely on shorter supply chains to make more products in fewer locations closer to the consumer. The United States, Northern Europe and parts of Asia will lead this technological transformation in the coming decades, and much of the developing world will find it ever harder to catch up. Regionalized supply chains fit into a more divided world map in which developed countries will have more options to develop their economies within smaller, and perhaps more politically compatible, trade blocs.

And so, with time, the familiar patterns of the post-Cold War globalized world will change. As conflicts in the developing world continue, and as countries try to balance demographic challenges with social pressures, developed nations will become more selective in whom they take in and with what skills. The ambitions of cross-regional trade agreements will be tempered, and the merits of cross-national integration projects from the European Union to the Association of Southeast Asian Nations will come under scrutiny.

Many will lament this projection of the world as a regression after decades of progress. But I see it as something quite natural. Europe has swung from the extreme of horrific warfare to another extreme, one that tried to convince itself that matters of national sovereignty and identity were wrinkles that could be smoothed out in a federal union. China has swung from economic turmoil to a level of global prowess. The world at large has swung from tepid trade to globalization and climate-impairing consumption. Imagine a pendulum swinging. The greater the swing, the longer it takes to travel to the center. Between two extremes always lies a point of equilibrium. Maybe that’s where the global pendulum is headed.