For Greece and Its Creditors, the Clock Is Ticking

For Greece and its creditors, time is slipping away. Both sides have strong incentive to wrap up a review of the country’s third bailout program by March. But despite the sense of urgency, a recent meeting between their representatives ended without a deal.
Greek farmers protesting tax increases use their tractors to block a border crossing into Macedonia. Growing public discontent with austerity measures linked to Greece’s bailout program could threaten the fragile coalition government. (SAKIS MITROLIDIS/AFP/Getty Images)

The government in Athens has balked at conditions creditors set for it to receive another round of funds, including pressure to introduce labor and energy reforms and to commit to spending cuts and fiscal reforms that would extend beyond the bailout program’s end in 2018. The pressure to reach a deal is still high enough on both sides that an agreement is probable, but weeks of negotiations likely lie ahead.

Ideally, Greece and its lenders would like to reach a deal by Feb. 20, when eurozone finance ministers are scheduled to meet next. But their Jan. 26 meeting ended with no date set for representatives from the creditor institutions to return to Athens to assess the status of the bailout program. The Greek government wants the review to end before March so its bonds would be eligible for the European Central Bank’s bond-buying program, which would lead to lower borrowing costs for Greece. (Athens hopes to return to bond markets by the end of this year.) But even if Athens and its creditors can strike a deal, the ECB may not include Greek bonds in the program because of its doubts about the sustainability of Greek debt.

Greece’s creditors, in turn, would like to wrap up negotiations before national elections are held in several European countries, starting with Dutch general elections in March. Those will be followed by elections in France in April and Germany in September. European leaders do not want the Greek debt to become an issue in those campaigns.

Greece will face several debt repayment deadlines in 2017, but the most critical is in July, when Athens is due to repay about 6 billion euros ($6.5 billion) to several creditors, including the ECB. It needs the bailout money that is being held up in the current negotiations to make those payments. Talks between Athens and its creditors could drag on until that deadline nears, but that would again put Greece in danger of defaulting on its debt payments. Neither side wants to take a chance on that.

One of the most contentious points of the Greek bailout program is the targets it establishes for Greece’s primary budget surplus, which excludes money for debt repayment. Terms of the bailout program stipulate that Greece’s primary budget surplus should reach 3.5 percent of gross domestic product by 2018. Greece had a surplus of 0.7 percent of GDP in 2015, and, according to Finance Minister Euclid Tsakalotos, the 2016 surplus will be about 2 percent thanks to a significant increase in tax collections. But the 2018 target may be unachievable.

This a touchy subject for Greece’s lenders, who did not approve of the way Athens used part of its budget surplus in 2016. Late in the year, Greek Prime Minister Alexis Tsipras announced that the country’s pensioners would receive a bonus payment, arguing that Greece could afford it. With politics on his mind, Tsipras wanted to show voters that after years of austerity measures, the country’s situation is improving. But the country’s creditors criticized the measure, complaining that they should have been consulted first. A compromise was eventually reached, and Athens promised that the bonus would not be repeated. Creditors now want Greece to introduce a measure that would lead to additional automatic spending cuts should Athens fail to reach the target budget surplus.

Greece’s budget surplus has also sparked disagreement between the International Monetary Fund (IMF) and the European Union. The IMF believes that the budget surplus goals included in the bailout program will be impossible for Greece to achieve. It also disagrees with the Greek government’s approach, believing that Athens relies too much on raising taxes rather than introducing the structural reforms the IMF thinks are necessary. As a result, the IMF has so far refused to join Greece’s third bailout program. And IMF participation is a key goal for Germany, a chief backer of the bailout whose government promised its parliament that the IMF would be involved. EU and IMF officials are currently discussing ways to engage the IMF in the program.

Total Greek government debt stands at about 180 percent of the country’s GDP, the highest rate in the eurozone. Most of that debt is held by Athens’ official creditors, which include the eurozone’s two bailout funds (the European Financial Stability Facility and the European Stability Mechanism), the ECB and the IMF. This reduces the risk that a Greek default would harm private investors, which was a concern when Greece’s financial troubles began almost a decade ago. The major concern today is that a Greek debt default could force it out of the eurozone, which would put pressure on the currency union’s other weak links, including Italy and Spain, threatening the eurozone’s existence. 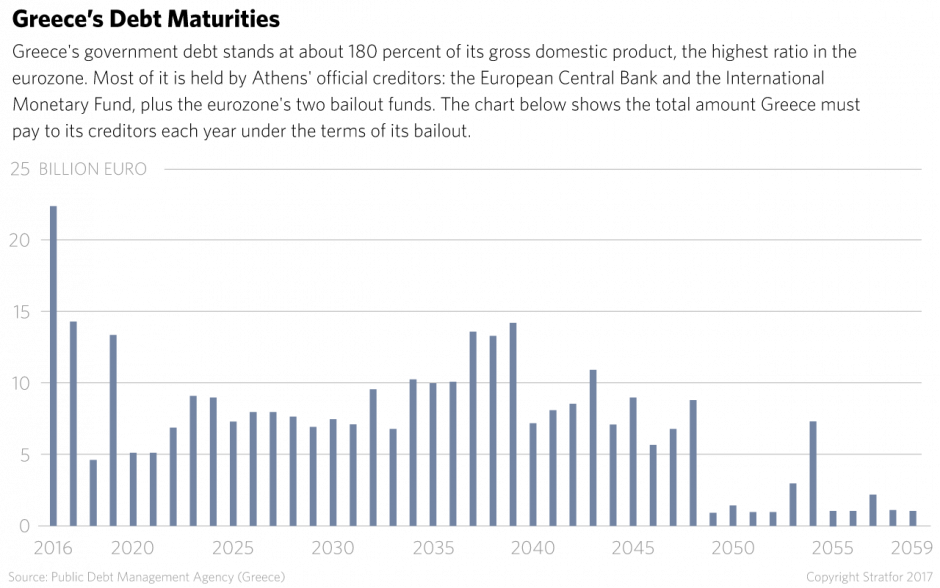 In the past the Greek government has sought a write-off of part of its debt, but the current debate focuses on how to make its debt burden manageable without letting it off the hook. Under the terms of the bailout program, Greece’s debt repayments would extend until 2060. The IMF has suggested placing a moratorium on all repayments until 2040, extending Greece’s debt maturities into the 2080s and introducing a fixed interest rate for the debt. Greece’s current interest rates are low but are subject to market fluctuations. These proposals are politically sensitive in countries such as Germany, where voters are wary of assistance to Southern European countries. An internal IMF document that was recently leaked to the media warned that if there were no changes, Greek debt could reach 275 percent of GDP by 2060. A statement by the European Stability Mechanism released Jan. 29, however, asserted that Greece’s debt is still manageable.

Eurozone finance ministers authorized some cosmetic debt-relief measures in late 2016, but Greece probably will not obtain significant debt relief this year. Governments in countries holding elections will be reluctant to agree to any such plan. Berlin and its allies in Northern Europe insist that Greece should be granted debt relief only after the current bailout program expires in mid-2018. But Tsipras and his government have spent significant political capital persuading Greek citizens that austerity measures are a necessary evil that will lead to debt relief from creditors. With debt relief temporarily off the table, his administration will push for softer fiscal targets and a slower pace of economic reform.

The Political Risk of Austerity

The coalition government in Greece holds a slim five-seat majority in parliament, which means that even a small rebellion among lawmakers could make it fall. Tsipras’ Syriza party and its coalition partners, the Independent Greeks, likely will try to delay new elections for as long as possible, especially considering that Syriza trails the conservative New Democracy party in opinion polls, and elections could oust it from power. But if public unrest fueled by frustration with austerity grows, the government could be forced to resign.

Regardless of the outcome of negotiations between Athens and its creditors, the outlook for Greece is bleak. The combination of a huge pile of debt, an unfavorable demographic profile (Greece has some of the lowest birthrates in the world) and low productivity will likely lead to years of low economic growth. Greece’s government will remain dependent on external aid to function. Sluggish growth, high unemployment and outside pressure will continue to create political and social problems for Greece.

The country’s political system could suffer under the weight of persistent public unrest. Anti-establishment sentiment leading to the progressive fragmentation of the party system would result in fragile coalition governments and frequent elections, complicating the introduction of economic reform. This could lead to the emergence of new anti-establishment parties or radical position shifts among existing parties. In early 2015, Syriza strongly criticized Greece’s traditional political parties in winning the general election. After it won, Syriza itself became the mainstream, introducing austerity measures in exchange for a bailout program that kept Greece in the eurozone. At the time, enough Greeks wanted to remain in the currency area to make austerity palatable. But continued public support for the eurozone is not guaranteed, especially after three consecutive rescue programs have failed to improve the standard of living in the country.