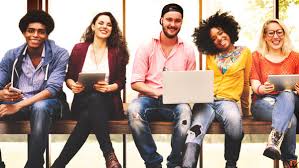 Millennials bring a lot to the workplace, but challenges exist for employers

It is VERY important to understand what makes a ‘generation’ tick.  Within that context is what are you – the employer – looking for in an employee?

Millennial are different, aren’t they? They seem to have their own ideas about how the corporate world works, and aren’t afraid to express them.  We’re excited and happy that they are different.  The world – and we’re specifically avoiding the use of the term the ‘corporate world’ – a mindset that must change. 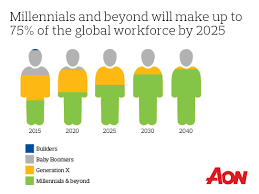 It is important to understand that according to a variety of polls – including AON, that by 2020, over 50% of the workforce will comprise the Millennial Generation. By 2025 they will be 75%.  That means that employers have a 50 percent chance of a wide-eyed greenhorn showing up in your interview room. That’s also a 50 percent chance of nabbing a youthful, energetic and talented employee for your company. It all depends on your perspective.

So how do we understand the following:  how to hire, what they’re looking for, what their work environment needs to be like and what motivates them.

When you reach out to Millennials,  don’t just give them a list of duties and responsibilities. Talk about concrete reasons why you chose them in particular and perhaps give them a ballpark salary range as well.

They’d rather you use email to reach them, according to LinkedIn’s Talent Trends Report – but LinkedIn Mail, phone calls, and text messages are also acceptable.

Yes, skills and experience help. Most millennials don’t have either of these and have no other means of obtaining them other than through an actual job. It’s better to hire the ones who show the most potential, have them learn on the job and make a decision about them from there.

If your company weeds out high-potential millennials on a regular basis, it might be a good idea to understand why you’re doing this. We advocate employers to get to know their potential hires.  Hold or conduct informational interviews. Meet them in a coffee shop, get to know them a little and what their passions are.  Through these, you can let the candidates decide for themselves whether they fit your company’s culture or not.

Millennials appreciate it when they’re not bombarded with meaningless phrases like “bottom line” or “take it to the next level.” They’re more likely to gravitate toward a company that speaks to them in simple, yet punchy, language.

Unlike their predecessors, millennials are ready to be leaders immediately. This desire to lead doesn’t mean they want to be promoted as soon as they set foot in the office.

Instead, they see a leader as someone who’s able to make an impact in the workplace—whether that someone holds a formal leadership title or not. If your company can help its millennials plan where they want to be five years from now, you’re more likely to retain those hires.

The traditional 9-to-5 setup just doesn’t work for millennials anymore. They’d rather have a job where they have flexible hours, telecommuting options, and extra vacation time. It’s not that they’re lazy—it’s just that this is more productive.  In fact, it’s only a smaller part of the workforce population that requires a ‘go to the office’ mentality and environment.

Most millennials would rather make a difference than making a ton of money.  They have seen the results that ‘money only’ decisions have wrecked in their lives, the environment and the ultimate global challenges they now face due to the pursuit of this without regard to the consequences of those decisions.  The younger portion of this generation is now becoming educated or informed consumers.  This is having a major impact on the economy as companies are struggling to react to this.

Compensate them enough for their work, but encourage them to give back to the community as well. You can also hold regular fundraisers, organize trips to impoverished neighborhoods, and do other things that will enable millennials to have a positive impact on the world.

For millennials, a no social media rule in the office is a death sentence. In fact, one-third considers social media freedom a higher priority than salary.  In one recent survey, 90 percent of teenagers said they use social media more than three times a day. Encourage them to use popular social media sites for their age group—on the condition that they become ambassadors of goodwill for your company through those same sites.

Our future is always driven by the next generation.  How we adapt and work with each generation is important and the divide between the current generation is large, but it NEEDS to be if a truly positive change will be made.

The choice is yours! – You can either embrace, adapt and grow with the new generation, or you can ignore and reject and you will struggle.