What makes the ice bucket challenge so successful? Part 1 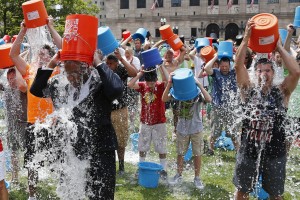 What does it take to come up with the next great marketing idea? This is always on the minds of business owners and marketing companies from Non-profits and small “mom and pop” businesses to multi-million dollar Mega companies. With the latest ALS ice bucket challenge gaining popularity, many non-profit organizations will feel more confident using social media as their tool to raise awareness and so should you with your business.

Billionaires and founders are joining this social media campaign and dumping ice cold water over their heads! Bill gates and a ever growing list of celebrities have been seen gleefully taking part in the campaign and many others are posting videos on Facebook. In order to raise awareness for ALS (Amyotrophic lateral sclerosis), also known as the Lou Gehrig’s disease, the initial idea was to either pour a bucket of water on your head or to give $100 to the organization. Most people are opting for both and ALS has raised more money with this marketing idea than they raised over the last 10 years combined as a result of the challenge. You know when your event is listed on Wikipedia and detailed out, that you have really created something great, but even if it does not grow to that scale the object is to create a successful marketing tool that builds awareness of whatever you are promoting.

So why has this one been one of the most successful social media campaigns till now?

Involvement: The beauty of this campaign is that everyone is involved. From Richard Branson to anyone around you on your daily travels. If CEO’s, founders and celebrities are involved in a charitable cause, then chances are everyone wants to be a part of it. Engaging people on an emotional level, making them feel appreciated and creating a plan with substance has more chances of gaining popularity and recognition. We all want to be part of the “hype”. As I am writing this we have had president Bush complete the challenge and even the celebrities like Vanilla Ice is doing it to get his name out there. Who said charity needs to be serious? If the intent is nobel, and you want to be a part of it, then why be so serious? If there is one thing that’s common among all videos and posts, it’s laughter.  Watch Bill Gates grin as he pours the freezing water over his head.  Invoking laughter and happiness is a critical element that helped this campaign go viral. Not to mention the fact that you get to challenge your friends to perform the challenge or else!  This is the other factor – involvement at the simplest level – YOU!

It has reached the level that many people don’t want to miss out on being a part of the event.  Its enabled everyone to get involved!

With Facebook, Twitter, Instagram, Vine, and blogging sites, marketing a product or an idea has become far more easier. But a weak idea won’t work no matter how much you publicize it using various social media tools. These tools are great for building relationships and to make your company or organization available for communication and customer service. The ALS ice bucket challenge was a fresh exhilarating idea rolled out using the right social media channels.

At times we see a campaign, read about it and move on. But for the ALS challenge, you are personally invited by others. Passing on the challenge for others, inviting them personally, and all for a good cause just strengthens the motive. Moreover, getting thought leaders and inspirational figures to promote content is a very effective way of getting your message across.

The ALS ice bucket challenge seems to have incorporated all the right techniques. Why do you think this campaign went viral? Share your thoughts.

So the spin on the great marketing and social media success is that many people may not understand exactly what they are donating for. We all know it is for good cause and it has something to  do with Lou Gehrig’s disease, but what does that really mean. We will be posting part two of this article soon so stay posted and check back often.